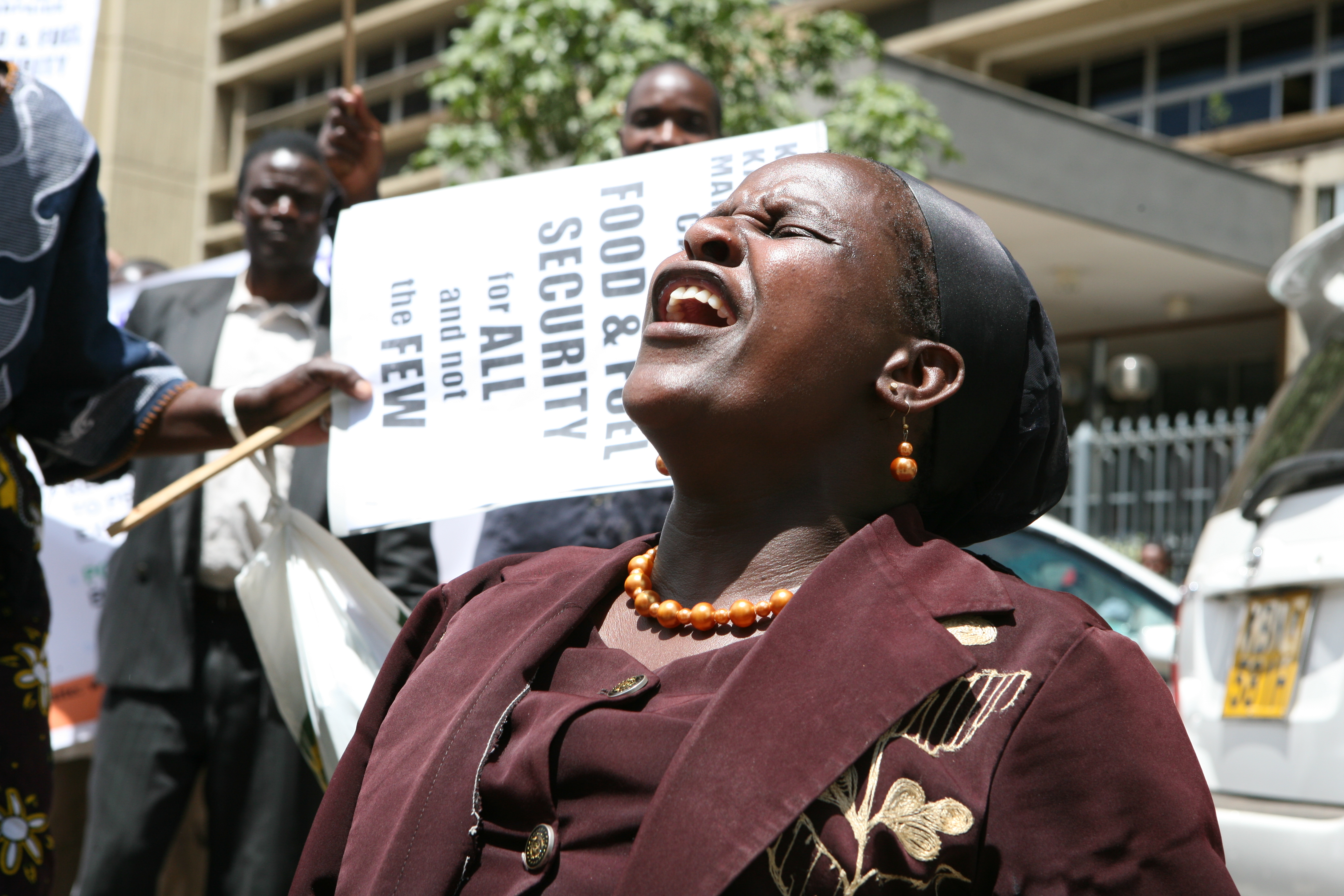 NAIROBI, 20 April 2011 (IRIN) – Hundreds of people took to the streets of Nairobi on 19 April to protest against the rising cost of fuel, which they blame on the government. Referring to the recent condom shortage in the country, the protesters chanted: “We want ugali [maize flour], we don’t want condoms!” as they marched from the centre of the city towards the Houses of Parliament. Spiralling fuel prices have caused sharp increases in the price of food and transport across the country.
“I am here to demonstrate because things have gone high, things like maize flour, sugar and kerosene. I want to ask the government to help the poor people because they are the ones who are in trouble – they are getting very little money,” said Kennedy, a father of three from Kibera, one of Kenya’s largest slums.

According to the World Bank, the price of maize flour, a staple food for many Kenyans, has increased by 27 percent in the past three months.

Last week, the country’s Energy Regulatory Commission announced a KSh9 (US11 cents) increase in the price of petrol per litre in Nairobi to KSh111.17 ($1.32). Diesel rose by 14 percent in the city, while kerosene, the main fuel for low-income households, rose by 8 percent. In response to the fuel crisis, public service vehicles increased their fares by 30 percent, hitting consumers.

Kenya’s Energy Minister, Kiraitu Murungi, attributed the high prices to external factors, such as an increase in the price of crude oil and the depreciation of the Kenyan shilling against the dollar.

Although Finance Minister Uhuru Kenyatta announced 20 and 30 percent tax cuts on diesel and kerosene respectively on 18 April, they did not deter the protests, organized by the Consumers’ Federation of Kenya (COFEK), which claimed they were “too little, too late”.

According to The People’s Parliament (Bunge la Mwananchi), the cuts will have no impact on the price of petrol. “Those cuts do not make any difference – how does that trickle down to me paying KSh70 [$0.83] to go home? It doesn’t trickle down! So women, men, old people have decided – we are going to go the Egyptian way, the Tunisian way,” Dina Awora Guy, the president, told IRIN. “Most of these are man-made crises. The fact that fuel prices are going up all over the world does not mean that Kenya cannot have policies to cater for eventualities like these. “

COFEK blamed the government’s “lack of political will” and “outright corruption” for the crisis and said in a press statement that the government was increasing fuel prices to fundraise for the 2012 general elections. A network of Muslim leaders called on the government to subsidize the cost of basic foodstuffs and to scrap the fuel control mechanism, initially intended to cushion the population against rising fuel prices, but which had instead contributed to the rising prices. Protests also took place in other major cities across the country. 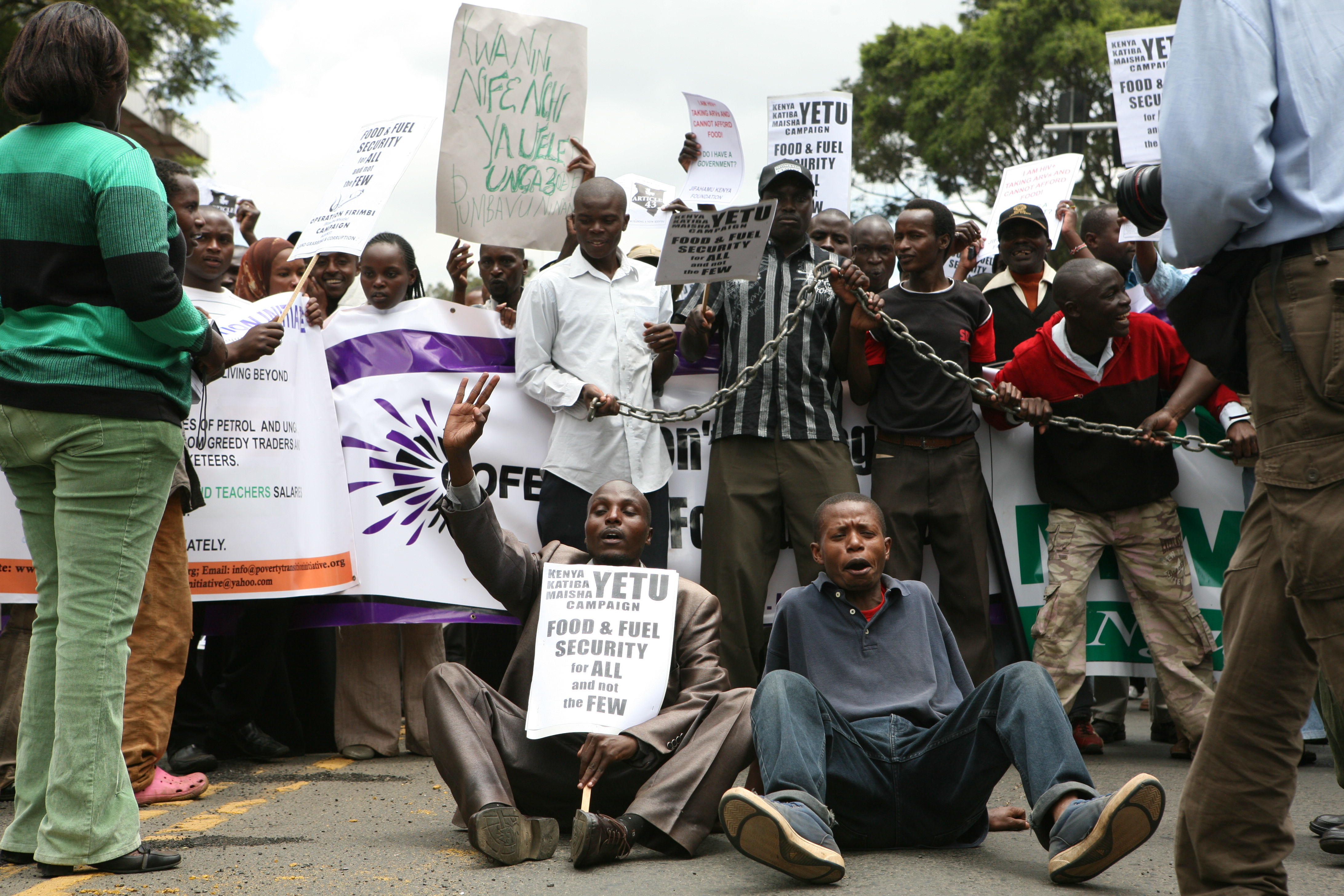 In northern Kenya, the sharp increase in fuel prices has hit relief operations, increasing the vulnerability of communities already in the grip of severe drought.

Abdi Galgalo, a volunteer aid worker in Isiolo, told IRIN the high fuel prices had resulted in a chain of problems for local residents. “The fare from Isiolo to Madogashe [about 150km] has doubled from KSh400 [$4.80] to KSh800 [$9.60] and many poor people, including those who have been referred for medical check-ups and treatment to Isiolo town or Nairobi are stranded in remote parts of Isiolo because they cannot afford the fare,” he said.

Galgalo appealed for the government’s urgent intervention to save thousands of people and livestock and to facilitate the distribution of relief food, which has remained at a standstill over the past two months.

“A majority of the population in this remote region, almost 80 percent, who previously depended on livestock, now requires relief food, having moved their animals away in search of pasture; they have no milk to sell in order to buy food and shops have foodstuffs which are now too expensive for them,” Galgalo said.

Abdullahi Ali, a resident of Sericho in Isiolo, said prices of tomatoes, cabbage and milk, for example, had more than tripled and many families were unable to afford a proper meal.

“This is the most terrible situation I have ever experienced since my childhood and strong tea is now the most common meal for many families. Here in Sericho, we are facing the worst water crisis, with people using weak donkeys, which have eaten nothing, to fetch water more than 40km away,” Ali said.

“The current situation has made life in Kenya very tough; I support the demonstrations in Nairobi, our people are too weak, they are faced with a lot of problems the government should act fast to provide food assistance, beans, oil and maize and offer military trucks to transport people and goods.”