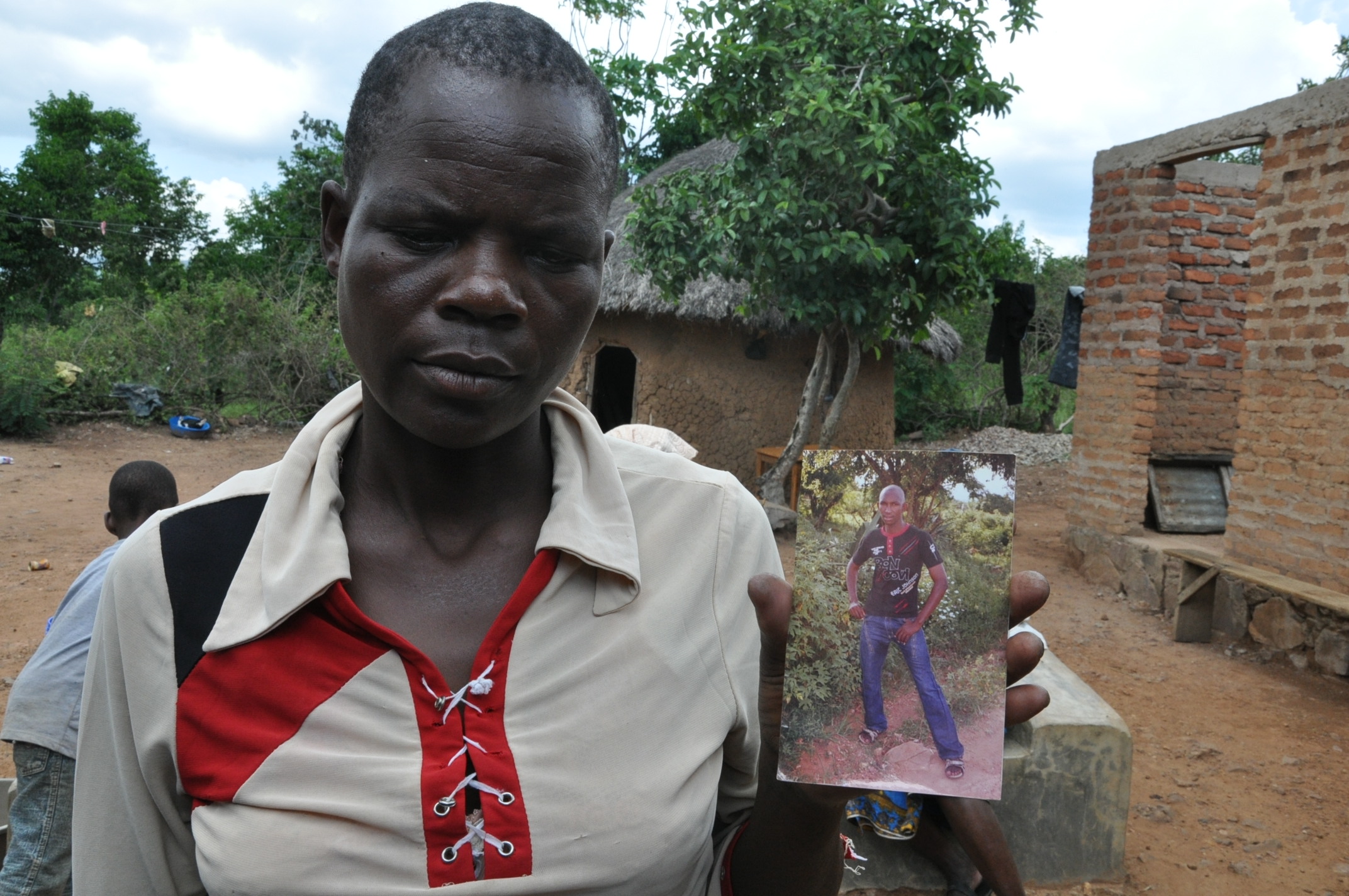 The Thigithe River in North Mara, Tanzania meanders through scattered villages and clumps of trees in a vast expanse of land ringed by hills close to the Kenyan border. Nearby, an enormous, sprawling mound of rocks and stones several meters high reaches up from the earth. This is the region’s notorious gold mine, operated by African Barrick Gold, a subsidiary of the Toronto-based Barrick Gold Corporation. The mine has a reserve of an estimated 2.95 million ounces of gold.

In May 2009, toxic sludge from the mine seeped into the Thigithe River. Reports from the surrounding villages alleged that the toxic material led to the deaths of about 20 people and to fish, crops and animals dying from the contaminated water. The following year, controversy raged in Tanzania’s parliament as activists, villagers and human rights organizations tried to have the mine shut down.

In the village of Weigita, David Mwita Magige described how his brother died after drinking the water shortly after the spillage. “My young brother went to the farm across the river. He felt thirsty so he drank water from Thigithe. Not a long time after, his head began to hurt and his stomach was aching so he decided to come home. Before long he was dead. He had started to vomit a lot of water for quite some time before he died.”

Magige said his family notified the village authorities, but no action was taken.  He said the company did not offer compensation for the death of his brother, nor for the deaths of relatives of neighboring villagers, “I know many people who have died from using water from Thigithe for shower, drinking and other domestic consumption,” he added. His wife reportedly had a miscarriage after 2 months of pregnancy, an incident that he claimed occurs amongst women who used Thigithe’s toxic waters. 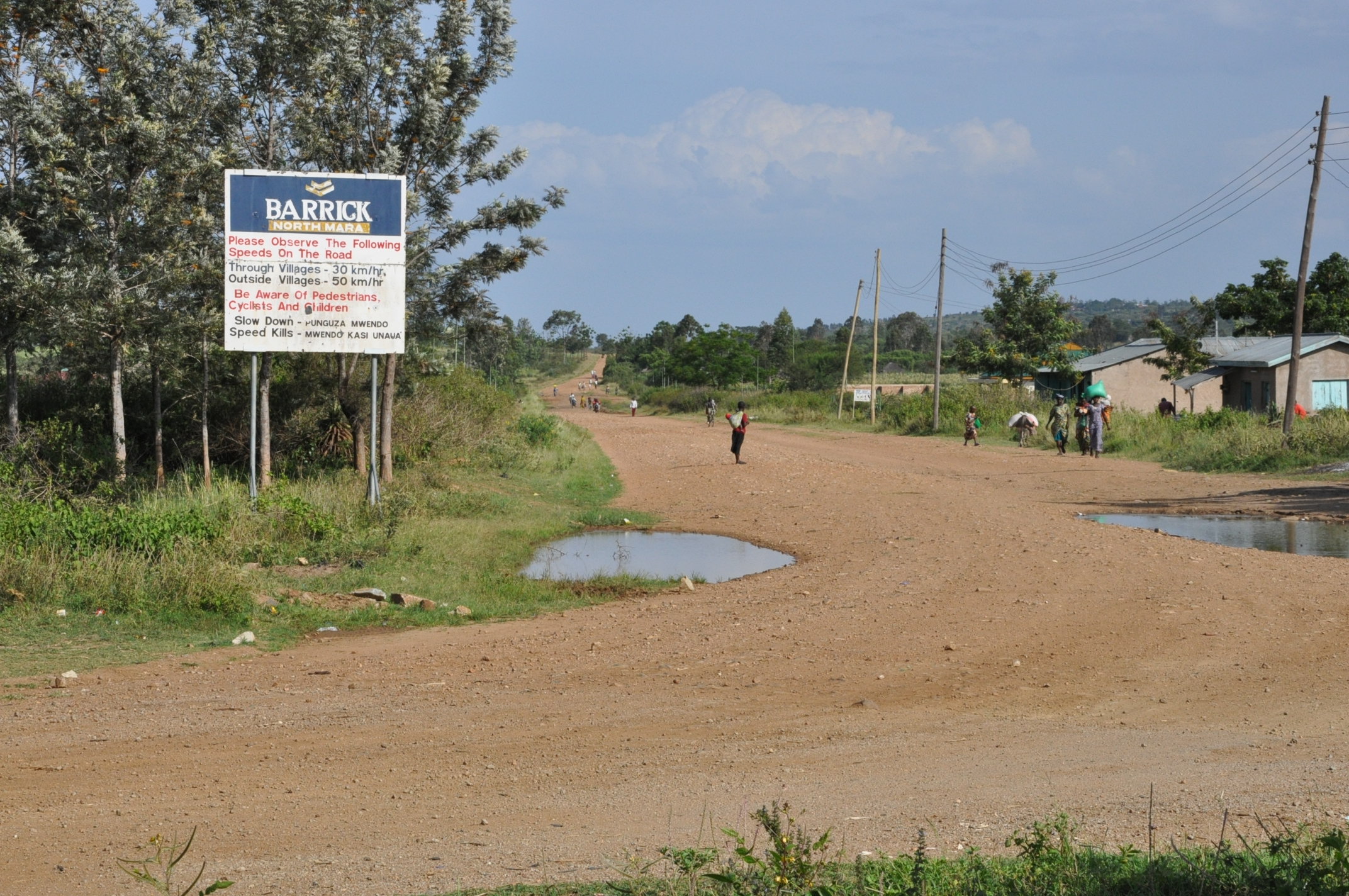 Continued reports of deaths from spillage

In 2009, Barrick acknowledged that the mine had caused a spillage, but claimed it had been cleaned up. Barrick’s spokesman at the time, Teweli Kyara Teweli, said that allegations that people had died were lies.

Almost two years later, African Barrick’s spokesperson, Charles Chichester, said in response to a request for an interview that the Thigithe River incident was no longer an issue of concern. But villagers living in Tarime district in North Mara have a different story to tell.

Village Chairperson Abel Kereman Nyakiha said more than 40 people have died from the three villages of Weigita, Nkerege and Nyakunguru since the spillage occurred in 2009, 20 of them in the months from June to October 2010. “Many people have died. From June to October, we have seen about 20 deaths,” he said. “We don’t yet have an official record at the village level, but we have asked each hamlet to record all the deaths that have taken place. The problem areas are three and these are the areas that are primarily using Thigithe river water in their everyday life.”

Nyahiri Ryoba Mwita, a farmer from Weigita, says that he lost 39 heads of livestock in the aftermath of the spill and that they continued to die afterward. “My life has not been the same because out of the cows that I lost, 5 were used for plowing,” he said. “We have complained, but our complaints were not listened to. The company has never been here to talk to the villagers who have been affected by the spillage.”

A short distance away from Weigita in the village of Kiwanja, villagers said they have been suffering severe health effects from the contaminated water. Omari Bina, a former security guard who used to work for Barrick, said he was laid off by the company in 2007 without compensation after he was injured in an attack. His daughter, now two years old, has a white pigmentation on her head, legs and arms which appeared when her sister took her to the river to wash, following the spillage. Her skin broke out in rashes and small spots. Fearing for her life, Bina took her to the nearest hospital in Tarime, but didn’t have the funds to take her to another doctor for proper diagnosis.

“It took a long time before the company responded to our needs so that our daughter could have some treatment. For about a year I tried to talk to the public relations officer, but he never listened to us,” he said. Finally, about a year later, the company took Bina’s daughter to Buganda hospital in Mwanza where she was given medication. “The doctors who treated my daughter come from the company. They come, they take my daughter, they go with her to the hospital and they bring her back here.” In Mwanza, the doctors diagnosed her with a fungal infection, but Bina does not believe his daughter has fungus.  “When my daughter used to lie down, before she had started the medication, there was a lot of fluid material oozing from her head. I don’t believe this is fungus.”

Other villagers were also affected, including Andrew Thomas Marwa who developed white spots on his face and head. He tried to treat his illness with medication, but to no avail. 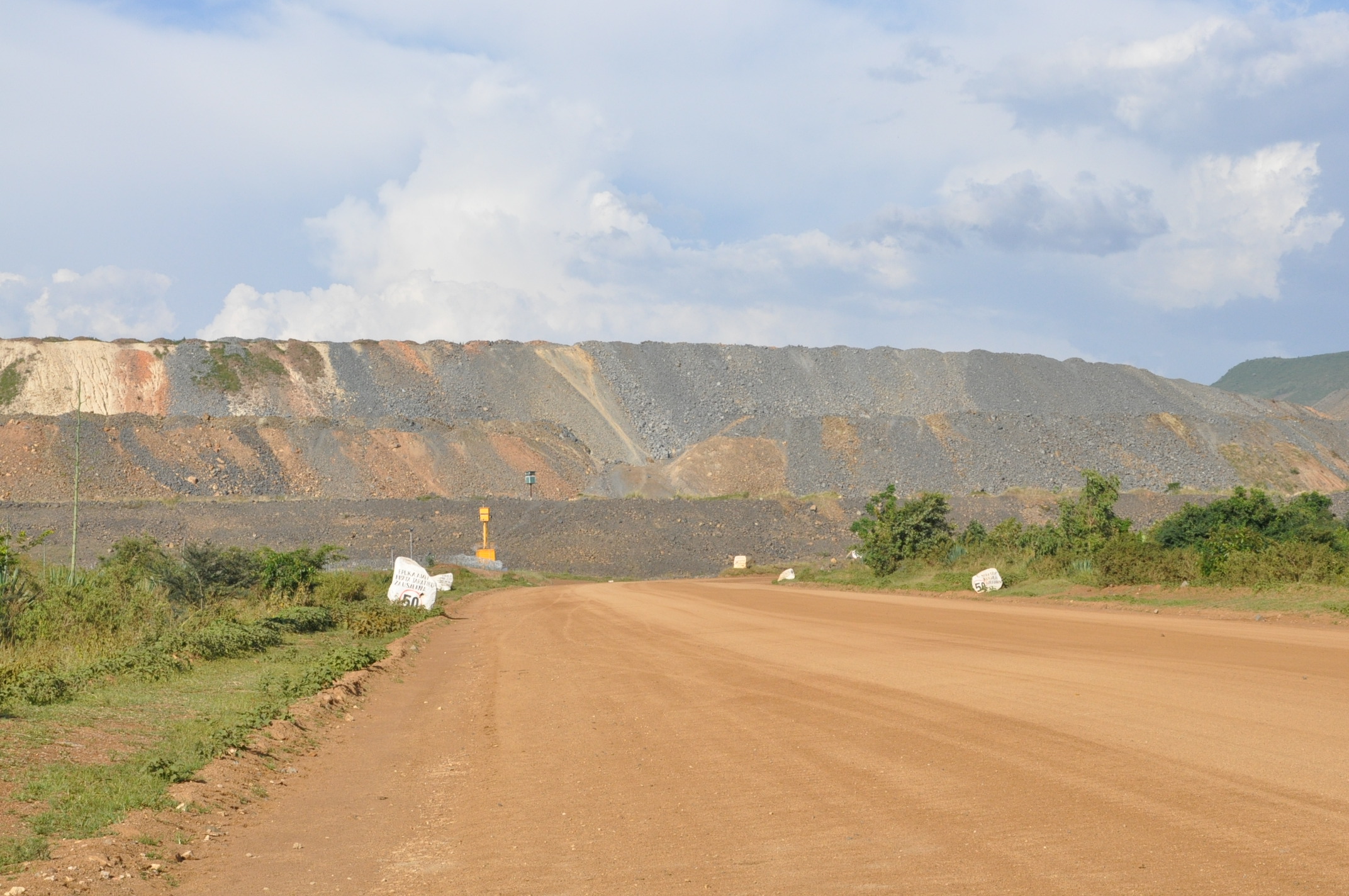 The company said medical experts concluded that the illnesses were “caused by genetics, immunological or other conditions. They were not caused by impacts associated with the North Mara operation over the past year.”

The Tanzanian government, likewise, insisted that the seepage from the river has not had any health effects. Aloyce Tesha, a spokesperson for the Ministry of Energy and Minerals, said that contrary to the villagers’ allegations, no fish or other creatures died from the chemical spillage into the river. “Given that no aquatic living thing was found dead following the incident; it becomes difficult to attribute claimed diseases and illnesses of people around the river as being caused by this seepage,” he stated in a report. Based on these suppositions, “the government cannot give compensation to the villagers given that it is difficult to ascertain if these deaths and losses really occurred and if they did, what was the cause.”

But despite the government’s and the company’s insistence that reported deaths and illnesses were not related to the mine’s operations in Tarime, an investigation sponsored by a number of religious groups in June 2009 assessing heavy metals around the North Mara gold mine found levels of trace metals and cyanide higher than what is considered permissible by the World Health Organization standards. Water samples taken from the river found nickel, lead and chromium levels had increased by 260, 168 and 14 times respectively since the year 2002.

Villagers are worried about the long term effects since water from Thigithe River flows into other rivers including River Mara and eventually, Lake Victoria, shared by Kenya, Uganda and Tanzania. The company says spill-prevention measures such as protective lining are put in place whenever there is an “accidental release of chemical solutions.”

But villagers said that the company took no steps to prevent spillage from the mine’s tailings dam. “They said they were going to put in place a kind of protective carpet to ensure that water does not leak out of the tailings dam, but they didn’t put anything there,” said Esther Mugusuhi, a resident of Matongo village. “Now they are alleging that it is local people that stole the carpet!”

Aside from the toxic spill, another disturbing set of reports that has emerged from North Mara’s Tarime district concerns indiscriminate killings of villagers by security forces belonging to the company.  In a small patch of land at Kiwanja village, Muruga Chacha sits in a chair outside her home. Two meters away lies a mound signifying her son’s grave. Charles Ganyi Chacha, a farmer, brick-maker and father of four, was killed on December 19th 2010 by a car his mother claimed belonged to the gold company

“My relatives told me, ‘your son has died,’” said Muruga Chacha. “I didn’t understand what happened. I went home. They said he had gone to see his friend in Nyangoto. But then a car owned by Barrick came and he started to run. When he ran, the car ran over him and then reversed over him again, killing him. I went there and found that he was dead. He was 35 years old.”  She said the company did not explain why her son was killed.

A similar incident occurred earlier in March 2010 when the husband of Deborah Paul, Paul Muhere Biraro was killed inside the gold mine. ““It was 16th March 2010 in the morning,” said Deborah Paul. “Somebody came to tell me, your husband is in the dispensary. We found him lying there half-dead. He died after half an hour. We don’t know what happened. The incident happened in the mine. We were informed by witnesses that the men who were in the company car beat him and this resulted in his death, so we don’t know what really happened.”

Andrew Thomas Marwa from Kiwanja village said that killings occur many times within a single month in Tarime. He named three people he saw killed by the company car, but said he did not know the reasons for the deaths. “There are other incidences,” he added, “one at Kiwanja, someone was shot from behind by security guards belonging to the company and another person was also shot in the same way, but there was no reason given by the company.  Someone else from Kiwanja called Muhere was also killed. After they got him, he was stabbed with knives.”

When asked whether the families were given compensation, he said, “No compensation has been given. They just say that they will assist with the funeral and compensate the deceased family, but after the burial, they just vanish and nothing is taken care of.”

Journalist Cam Simpson carried out 28 interviews in October 2010 which revealed a total number of 15 people injured and 7 killed over the course of the past two years in the mining area.

African Barrick declined direct requests for interviews about the killings as well as about the continued reports about the toxic materials in the Thigithe River. In response to a query from the Tanzanian Ministry of Energy and Minerals to African Barrick, Mining Manager Samuel Eshun and Security Manager Arthur O’Neill refuted allegations of killings by Barrick’s security officials. They stated that they only knew of two accidents occurring on December 3rd 2010 in which “illegal miners died when they fell down and landed on the ramp” in Nyabirama pit.

The Regional Police Commander for Tarime and Rorya regions, Mr. Massawe, also refuted the allegations and claimed he was only aware of 2 incidents in which 4 miners had died in mine-related accidents.

On November 19th 2010, Barrick announced that it had signed onto a set of voluntary guidelines on human rights and security to “ensure that human rights principles are reinforced” and that in their security guidelines, protection of people “is first and foremost.”

According to human rights groups, the company is not adhering to its own commitments. Chacha Wambura, Executive Director of Foundation Help, an organization that works in the mining-affected areas in Tarime district, said that the killings are a form of intimidation to enable the company to do as it wishes. “The authorities want to justify that the people in Nyamongo are hard people to live with and they don’t want investment in their area. But actually it puts the company in a very bad situation where at the end of the day, no serious shareholder would want to be associated with this company.”

A campaign group called Protest Barrick held a protest outside Barrick Gold’s Annual General Meeting in Toronto last April to bring attention to injustices committed by Barrick in different countries. A spokesperson at the protest on behalf of Lawyers Environmental Action Team/Friends of the Earth Tanzania accused Barrick of “non-adherence of environmental standards and serious abuse of peoples’ rights.” At the same time, African Barrick has seen a 20 percent increase in its revenue from 2010, producing 173, 097 ounces of gold in the first quarter of 2011 from its Tanzania gold mines.

For more information and to take action visit: Protest Barrick